The HL7 Simulator is a useful tool for simulating a live feed of HL7 messages. Effectively, it acts as a simple HL7 TCP/IP client.

Two versions of the HL7 Simulator are provided: a GUI application and a command-line application.

The listener operates as a TCP/IP server which is listening on a port number. The application that you wish to receive messages from must be configured to connect via TCP/IP as a client to this port on the host that the listener is running on.

Getting ones hands on HL7 data is one of the biggest pains in the proverbial even for us. See our Getting Sample HL7 Data article for details on generating data and a few sources of sample data. If you have some good quality sanitized sample/test HL7 data please send it to us and we will happily post it on this site.

The Simulator can be used through Windows GUI, or as a command-line application. 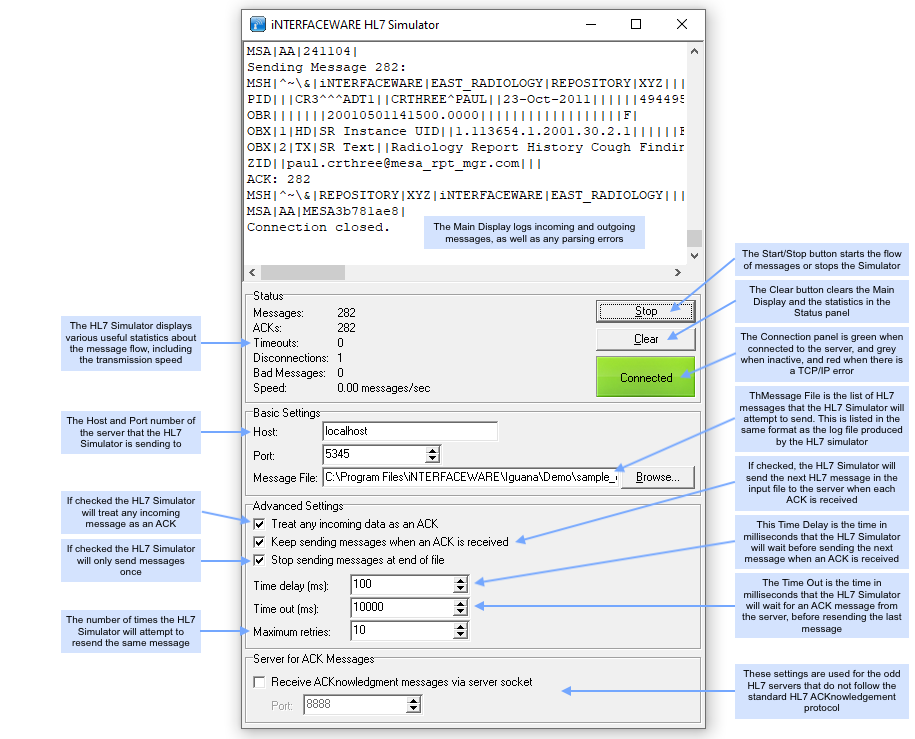 The Simulator reads each message from the log file, and attempts to send it to the host using the port number specified on the form. The port number is specified in the LLP Listener Connection Settings Port settings (though you can use any llp listener host + port, it does not even need to be Iguana).

When it receives an ACKnowledgment message from the receiver, if the Keep sending messages when ACK received check box has been selected, it will send the next message in the input file.

If it does not receive an ACK message in the required Time out period, the simulator will attempt to resend the last message, repeating the action up to the number of retry times specified in the Retry Count box.

The time delay box specifies how much time to wait after getting the ACK message from the receiver before sending the next one.

Note: The simulator can also be used to deal with odd systems which do not follow the standard HL7 practice of ACKnowledging on the same port as the sender. These systems expect to be able to send their ACKnowledgement messages back to the sender on another socket that the sender is listening to.

By selecting Receive ACKnowledgement Messages via Server Socket, the Simulator can be configured to expect the ACK messages to come back via the port number specified in the box below. This is quite unusual and should not be necessary for most users.

Tip: The HL7 Simulator GUI does not run on the Mac, but you can easily send messages from a Windows machine, simply enter the network address or network name of the target machine in the Host field. For example, when running the Simulator in a Parallels VM, just use the IP address for the Mac (from advanced network setting in system preferences).

The command-line version of the HL7 Simulator is named hl7simulator. Where it is located depends on the operating system that you are using:

When you start hl7simulator from the command line, you must provide three parameters:

The syntax for hl7simulator is:

The following table provides a complete list of the parameters that can be provided to hl7simulator. These parameters can appear in any order.

Here is an example of the output from hl7simulator:

As messages are sent, a running count of the message total is displayed in your command prompt window. When hl7simulator stops running or is terminated, it displays the total elapsed time and the number of messages sent per second (shown here as TPS, or transactions per second).

If you try to run hl7simulator when there is no Iguana channel listening on the port you specify, you will see messages similar to the following:

In this case, the –reconnect_attempts parameter specifies how often hl7simulator will try to send the message before giving up.

The HL7 Simulator takes a text file with HL7 messages in it as its input. Messages from this text file are replayed as a client TCP/IP program using the LLP protocol.

The Simulator is very specific about the format of this message input file. This format requires each message to be formatted on a single line with 0x0D characters separating the segments, and a line feed (0x0A == 10 == \n) and carriage return character (0x0D == 13 == \r) sequence at the end. In an editor like notepad when word wrap is off, it appears like each message is one line in the file.

The input file cannot be shared by two running instances of the Simulator or Listener. If multiple instances of these applications must be run, each must have its own input/output file.

Note: From version 3.211 and above of Chameleon the simulator is able to handle lab report messages with embedded \n (0x0A) characters in textual data. This is a valid use of the HL7 standard. However, always ensure the messages in your log file do not have embedded \0x0D characters in the textual data since this is illegal. The Simulator looks for \r\n at the end of each message in the log file.

The HL7 Listener is a GUI application, unlike the HL7 Simulator there is no command-line version.

The following screenshot explains the settings available for the HL7 Listener Utility: Each incoming message is “ACKnowledged” by the HL7 listener and logged into the specified message log file. Each message is formatted in a single line with 0x0D characters separating the segments and a line feed at the end of each message. In an editor like notepad when word wrap is off, it appears like each message is one line in the file.

The log file cannot be shared by two running instances of the HL7 Simulator and Listener. If this is required, a different log file should be specified for each application.

The log file can then be used in the HL7 Simulator to replay the flow of messages. The HL7 Simulator is very specific about the input message log file format. As a result it will only accept the format generated by the HL7 Listener.

Note: The Listener needs exclusive access to that the port it is listening on. It’s not possible for other applications to listen at the same time to the stream of HL7 messages that the listener is receiving.

How the HL7 Listener works

The HL7 Listener uses an Auto ACKnowledgement to generate ACK messages. The settings used to configure the format of the ACK messages are stored in the listener.vmd, which ships in Chameleon‘s application directory (e.g., C:\Program Files\iNTERFACEWARE).

Note: Sometimes you might need to change the listener.vmd file when dealing with systems which are not HL7 compliant. For instance, you might use an Iguana Filter script to remove illegal embedded 0x0D characters.